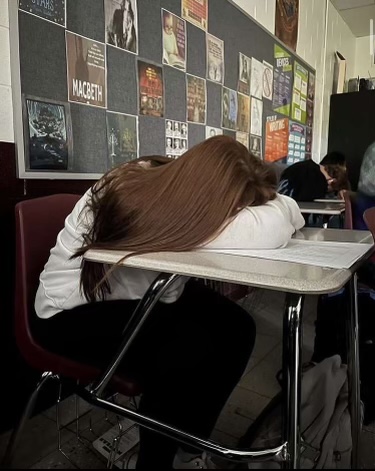 Some say students sleeping in class is no laughing, or posting, matter.

Whatever you do… DON’T… FALL… ASLEEP!

For a couple months now, there has been a Woodrow “sleeping page,” an Instagram account that posts pictures of people sleeping in school, and students are very divided on the topic whether or not this is beneficial. A WWHS junior, Justin Harris, says “I don’t really mind it, it’s actually kinda funny to be honest,” which in a way relates to how other students feel about the topic. Another WWHS junior, William Bailey, says “It’s a little bit annoying because some people don’t really get much sleep at night and even if it’s not okay to sleep in school, you should still be able to do it without it being posted.”

WWHS Student, Nate Hodges, says, “In reality, taking pictures of people in their most vulnerable stage is not okay.”

Personally, I don’t mind it, however I don’t feel like when students sleep in school, they shouldn’t have to be scared about accidentally falling asleep and getting it posted on social media. In a sense, it is funny, and it might even be a good thing to keep people awake in school.

The page’s first post was back in December of 2021 and since then, most of the page has been mysteriously deleted. The sleeping page’s owner still remains anonymous. No one knows why the account started or even why it ended, or why some pictures are arbitrarily being removed.

From what it looks like, the page has died down since it’s moment of fame. It had nearly 200 followers at its peak, but has since dropped significantly to only 85.

It would appear the era of the sleeping page has come to an end.