The Eagle Dispatch • May 4, 2022 • https://wwhseagledispatch.org/1226/entertainment/west-virginias-creepy-cryptid-mothman/ 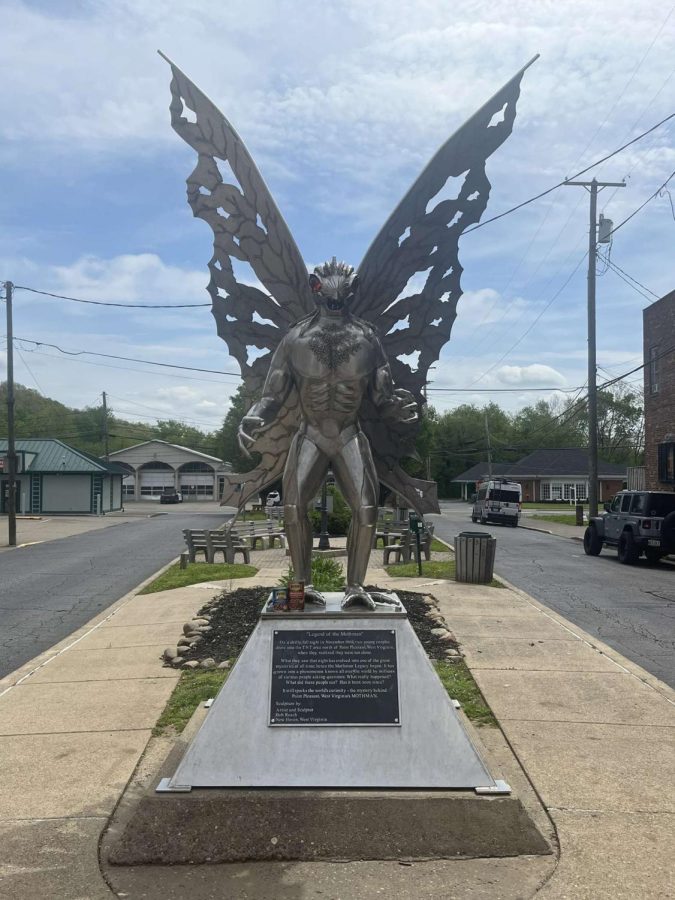 A statue stands in Point Pleasant as a reminder of the ominous Mothman legend. There is even a town festival celebrating the creature.

On the night of November 15, 1966, two young couples from Point Pleasant–Roger and Linda Scarberry, and Steve and Mary Mallette– told police they saw a large gray creature, whose eyes seemed to “glow red”. They described it as a “large flying man with ten-foot wings”. The creature followed their car while they were driving in an area right outside of town known as “the TNT area”, the site of a former World War II munitions plant.

This creature is known as the Mothman, who stands at approximately 8 feet tall, capable of flight, and an 8-15-foot wingspan. One bone-chilling detail with the sightings is the haunting and memorable red eyes. One woman reports the eyes as “red like you never saw red.”

In West Virginia folklore, the Mothman is a humanoid creature who was first reportedly seen in the Point Pleasant area from November 15, 1966, to December 15, 1967.

West Virginia is not the only place that has been claimed to be terrorized by the giant moth. The case of the Chicago Mothman has also been a topic amongst people interested in the paranormal. Despite exhaustive research, interviews with witnesses, and cryptozoologists were unable to get to the very bottom of the Mothman mystery.

The story of Mothman has made West Virginia’s tourist numbers skyrocket. The annual Mothman Festival, which takes place on the third weekend in September, thousands of people flood to the streets of Point Pleasant to indulge and celebrate all things Mothman. You can even take a photo with a giant statue of the flying monster.

There have been many theories surrounding the Mothman, one of them being that during World War II, 8,000 acres of a wooded area near Point Pleasant were used to manufacture and house explosives. The explosives were housed in concrete igloos, which were spread out across the land. After the war, these explosives were abandoned, and the area was partially converted into a wildlife preserve. In the 1980s, it was discovered that the explosives had critically contaminated the land. Some speculate that the contamination has mutated local birds into what would eventually become the Mothman. To this day, the igloos remain.